FUJIFILM Corporation (President: Kenji Sukeno) has been awarded the award for excellence “Art of Moment Award" at Japan Mécénat Awards 2018, organized by the Association for Corporate Support of the Arts for the activities in which Fujifilm has engaged at FUJIFILM SQUARE*1 , a multi-purpose showroom run by the company in its headquarter in Tokyo Midtown (Minato Ward, Tokyo). The award was presented in recognition of (1) the management of the FUJIFILM PHOTO SALON (2) the management of the Photo History Museum and (3) the collection and display of Fujifilm Photo Collection.
FUJIFILM SQUARE operates every day*2 and is free to enter, giving visitors the opportunity to enjoy photographic exhibitions and various other displays. Since the opening of the facility in 2007, more than 1,300 exhibitions were held and total of more than 6 million people from wide variety of ages have visited the facility.

Since the company's founding, Fujifilm has consistently communicated the wonder, joy and emotion of photography, as well as the importance of preserving photographs, in order to preserve and sustain the culture of photography. In 1957, the Fuji Photo Salon opened in Ginza, Tokyo, as a place for high-quality works from both professional and amateur photographers to go on display. Since the 2000s, as the digitalization brought a rapid decline in demand for photographic film, Fujifilm once again declared a commitment to strive for the further enhancement of the culture of photography even as the photographic film industry as a whole stood at a crossroads, promising to continue the company's photography business. In 2007, concurrent with the relocation of the company's headquarters to Tokyo Midtown, the Fuji Photo Salon was renamed FUJIFILM PHOTO SALON, other facilities including the Photo History Museum were added, and the facility reopened as FUJIFILM SQUARE with an expanded exhibition space. FUJIFILM SQUARE is now enjoyed by guests of a wide variety of different ages, who come to view a diverse range of exhibitions including not only famous historic photographs but also photographs taken by popular young photographers for social media as well as photographs taken using instax, Fujifilm's popular instant camera system. In addition, FUJIFILM SQUARE holds various events including commentaries on the photographic exhibits. These occasions have proved popular with visitors as a means of deepening their understanding of the works on display.

In 2014, to celebrate the 80th anniversary of the company's founding, Fujifilm launched the Fujifilm Photo Collection, a collection of specially selected photographs from each of 101 influential photographers in Japan from the end of Edo period through to the modern day. By exhibiting this unique collection at museums around the country, Fujifilm has helped draw attention to the artistic value of these works while also promoting understanding of the history of photography in Japan.

FUJIFILM SQUARE received the award in recognition of the two points listed below:

FUJIFILM SQUARE contributes to art and culture through various activities but this is not possible through the work of Fujifilm alone. It became possible together with the wonderful photographic works provided by the various exhibitors and many people who come to visit the venue and appreciate photography. Fujifilm is committed to continuing to communicate true value of photography and, through its activities at FUJIFILM SQUARE, Fujifilm will continue working to achieve the further development of the culture of photography.

Through the further development of leading-edge, proprietary technology, Fujifilm is striving to provide new value, contributing to the resolution of various social issues, while also being committed to ongoing growth and innovation and will never stop evolving. 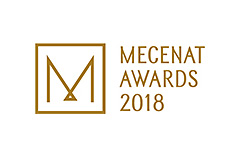