Participating in the UN Global Compact 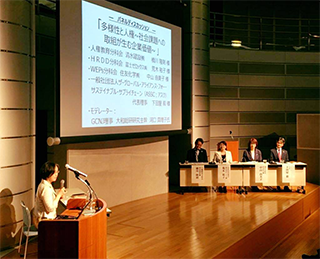 In Japan, FUJIFILM Business Innovation joins subcommittees of GCNJ, which are organized by its member companies to discuss and share information on the themes in which they are interested. We also serve as a co-organizer of the Human Rights Due Diligence (HRDD) Subcommittee and promote its activities. At the Learning Forum held for GCNJ members in June 2019, Fuji Xerox participated in a panel discussion as a representative of the HRDD Subcommittee. The panel discussion was on the theme of diversity and human rights with the subtheme of corporate value created by addressing social issues. 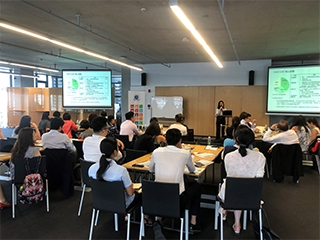 As for the activities organized by the UN Global Compact office in New York, in fiscal 2018 we participated in “Reporting on the SDGs” and “Decent Work in Global Supply Chains,” which are two of the Action Platforms to achieve the SDGs where global leadership is expected to play a crucial role. In particular, for “Decent Work in Global Supply Chains,” discussion has been fostered to educate and enlighten suppliers on issues related to labor exploitation and human rights in addition to “auditing” them, with the aim of solving these issues across supply chains. This approach is similar to the approach that we are taking for ethical procurement. When a seminar for the Action Platform was organized to collect related information in Shenzhen, China, CSR Manager Liu Meihua of Fuji Xerox Shenzhen was invited to the event to make a presentation on Fuji Xerox’s ethical procurement measures, which were highly appraised by participants.

We have also been proactively contributing to the initiatives implemented for sustainable growth on a global scale, including the activity conducted by the UN Department of Economic and Social Affairs (UN DESA) in fiscal 2018 to introduce exemplary measures taken by companies and organizations to achieve the SDGs.

We would be most pleased if you would let us know any feedbacks or inquiries you might have about our CSR initiatives.