TOKYO, October 8, 2020 – Fuji Xerox Co., Ltd. launches two new production printer models: Versant 3100i Press and Versant 180i Press in the production color market. The two new models will be launched from mid-October in China and the Asia-Pacific region, and on October 30 in Japan.

Fuji Xerox introduces the Air Suction Feeder as an add-on capability to both Versant 3100i Press and Versant 180i Press. With this new feeder, the printers can handle a wide range of paper including thick and long paper, which enables stable transportation of various types of paper and improve productivity. Users now can create a wider variety of printed materials and further evolve on-demand printing capability.

The newly developed Air Suction Feeder utilizes three types of air to achieve stable paper feeding. First, air is blown inside the tray through the side blower to separate papers. Next, with the suction of the shuttle headNote 1, which uses technology that is unique to Fuji Xerox, the paper is secured strongly. Any unnecessary paper is then separated using an air knife to transport the paper sheet by sheet.

The Feeder can handle paper of different thicknesses ranging from thin paper at 52 g/m2 to thick paper Note 2 at 400 g/m2. The new paper tray is also compatible with various paper sizes for printing, from small sized paper of 98 x 148 mm (simplex) Note 3 to long paper up to 330 x 1200 mm (simplex)Note 4. Paper which typically cause stress in paper feeding—such as paper containing a concentrated amounts of paper dust, uneven paper, cohesive coated paper and preprint paper for offset printing that uses powder— can now be transported in a stable way. 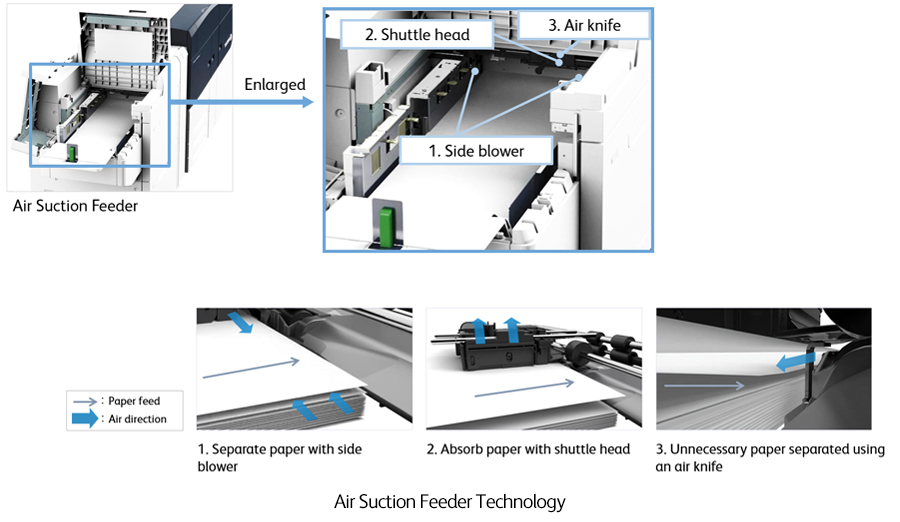 Long paper can now be continuously fed from both the Air Suction Feeder and the conventional manual feed tray. This enables the printer to load 100 sheets of paperNote 5 at 1200 mm (simplex) and 900 sheets of paperNote 5 at 864 mm (duplex), delivering high productivity. Printing speed has been improved by approximately 2.5 timesNote 6 for the Versant 3100i Press, which can now print 23 pages per minute, while the Versant 180i Press can now print 19 pages per minute at an improved printing speed of 2 timesNote 7 as compared to their earlier models. Furthermore, printer’s re-adjustment time is greatly reduced to just a few seconds when the printing mode is switched from regular to long paper.

With Versant 3100i Press and Versant 180i Press, users can now handle a wider variety of paper for printing with high quality via automated process checks and correction, and boost productivity in the printing business.

For reporters with an inquiry about FUJIFILM Business Innovation

For customers with an inquiry about our products or services

For reporters with an inquiry about FUJIFILM Business Innovation

For customers with an inquiry about our products or services