Different from conventional pulverized toner which is produced by milling raw material minutely, EA (Emulsion Aggregation) toner is produced using the Emulsion Aggregation method, in which resin, pigment, and wax particles are aggregated to form toner particle in wet process (in water) (Fig.1). This type of toner is called chemical toner.
In the xerography process, color images are generally reproduced by superimposing toners of four different colors (cyan, magenta, yellow, and black). Thus, toner having the desired particle size and uniform shape is necessary to achieve high image quality. Precise control of a series of chemical reactions makes it possible to produce EA toner, characterized by particles smaller in diameter and more uniform in shape than those produced by the conventional pulverized method (Fig.2).
In addition to that, the amount of carbon dioxide emitted in production is much less (about 65% of traditional method), and usage efficiency of toner in printing is higher. So, this is an environmentally friendly toner. (Fig. 3)

Note1
Oil-less: Oil for stripping sheets from a fuser roll is not necessary.

We have improved EA toner further, and developed EA-HG toner of much higher performance. In EA-HG toner, we changed the color material for magenta, and increased the reproducibility of red color. We also made the toner generate brilliant colors with sheen and thickness, by making it easier to melt so that the surface of images becomes smoother. Besides, by adopting a new wax and optimizing emulsion aggregation process to generate toner, we have improved sheet stripping performance to enable smooth sheet stripping from a fuser roll in the fusing process and realized high image quality and high productivity at the same time. 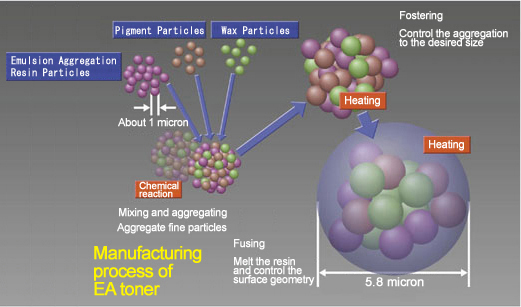