Tokyo ― FUJIFILM Corporation (President: Kenji Sukeno) is pleased to announce the development of the “FUJIFILM PROJECTOR Z8000 (FP-Z8000),” which boasts high brightness of 8000 lumens (lm) and a class-leading*1 compact and lightweight design. The new product, to be launched in the beginning of 2021, will join the lineup of the Z Series of ultra-short throw projectors equipped with the world's first “folded two-axial rotatable lens.”

Projectors are used in a wide variety of situations including offices and educational institutions. In recent years, opportunities have expanded to include projectors in spatial design, as well as presentation at commercial facilities and art galleries or museums. These have increased the needs for projectors to be implemented for effective spatial presentation in limited space. 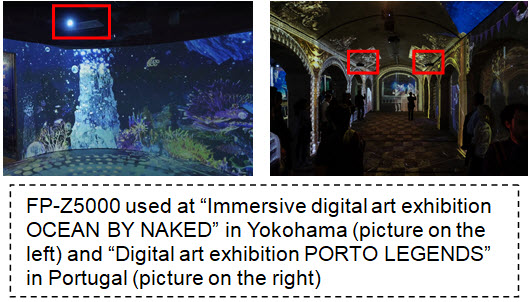 Fujifilm entered into the projector market last year with the launch of the ultra-short throw “FUJIFILM PROJECTOR Z5000 (FP-Z5000),” equipped with a folded two-axial rotatable lens. The FP-Z5000 is being used in digital art exhibitions*2 worldwide and introduced to company showrooms or commercial facilities, with users praising its capability to project images in various directions without having to move the main unit, and throw massive images from a close-up distance.

The new FP-Z8000 inherits the main features of the FP-Z5000 while adopting a high-transmittance lens and a laser light source to deliver bright 8000lm images. It can project vivid and high-contrast images even when used for digital signage in brightly-lit stores. The projector comes in a class-leading compact (W460mm x D510mm x H163mm*3) and lightweight (weighing approximately 19kg) form factor by the optimum layout of components inside the main body. It can be positioned vertically or horizontally to enable spatial presentation that makes effective use of otherwise wasted space. The geometric correction function, which corrects distortion caused when projecting images on a curved surface, makes it possible to throw powerful images on places where such visual projection could not have been considered.

With the expected launch of the new FP-Z8000 in the beginning of 2021, Fujifilm will expand the lineup of the Z Series, contributing to the creation of diverse spatial presentations at commercial facilities and art galleries or museums.

Fujifilm has been working on research and development, manufacturing and marketing of FUJINON-branded lenses, which includes broadcast lenses and cine lenses. The company is also tapping into its advanced optical technology and image processing technology, nurtured over many years, to develop the world’s first polarization-based*4 high-performance multispectral camera system, broadening its scope of operations in optical device business. Fujifilm will strive to achieve further business growth by continuing to develop innovative products that meet diverse market needs.

1 Among ultra-short throw projectors equipped with a laser light source, capable of projecting images in brightness of 8000lm or above (TR value of 0.4 or below) as of July 16, 2020 according to Fujifilm. The TR (Throw Ratio) value represents the ratio between the screen's width and projection distance. The smaller the TR value is, the closer the projector can throw large images onto a screen.
2 Events for displaying artworks produced with digital technology.
3 Dimensions of the main body, excluding protruded sections and adjustment leg, with the lens folded in.
4 A system based on light oscillating in a specific direction (polarization).

1. Names of the developed product and color variations

2. The "folded two-axial rotatable lens" for spatial presentation as intended by designer

Product specifications and exterior appearance are subject to change without notice.

For inquiries on information in this media release, contact: