In recent years, metallic printing that can reflect light has been growing in popularity for its versatility and ability to create a dramatic impression, and it is used for various purposes in the printing industry such as for printing greeting cards, book covers, labels, and packages. At FUJIFILM Business Innovation, we have made it possible to use a reflective pigment by adapting the emulsion aggregation (EA) method used to produce toner, thereby succeeding in developing gold and silver toner that is capable of the energy-efficient, low-temperature fusing achievable with EA-Eco toner while having a high sheen.

With the conventional pulverization method, it was only possible to produce unevenly shaped toner particles whose reflective pigment particles were not oriented consistently. Also, the conventional toner particles had pigment particles that were not completely contained within the toner particles and protruded outside, resulting in image defects due to insufficient charging and transfer defects from electricity leakage caused by the protruding pigment. Therefore, it was difficult for this toner to be used with the xerographic system. To address this, FUJIFILM Business Innovation utilized and adapted the EA method to orient the flat reflective pigment particles in the same direction, thereby developing ellipsoid-shaped toner particles that can fully contain the pigment particles. This new method allows the toner to meet both the basic performance requirements for toner as well as the performance requirements for metallic printing. In this way, this toner can be used with the xerographic system (Fig. 1).

By making the shape of each toner particle into a flatter ellipsoid shape, it has now become possible to align the orientation of the reflective pigment particles that are contained within the toner particle with the long direction of the toner particles. Hence, when toner is transferred onto media (paper or film), its pigment particles lay parallel to the media, allowing for higher reflection of light from the pigment after the image is fused onto the media to achieve a high sheen and create a metallic appearance (Fig. 2).

Fig. 2: Comparison of before and after the toner is fused onto media (vertical cross-section diagrams)

This reflective pigment we have developed does not allow light to pass through it, and therefore the color of the underlying media does not show through in areas where this toner is printed. This means that images with a highly metallic appearance can be printed not only onto plain white paper but also onto various other kinds of media, such as media that already has printed text, colored paper, and transparent film (Fig. 3). 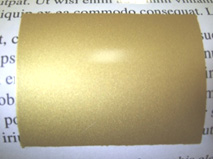